A city not for the faint hearted, especially in June. I managed to time my visit with a heat wave that was scorching the northern interior regions of India. Days of  47 degree (Celsius) were getting hard to bear, and the nights were not really a big relief, still quite a sweaty experience. 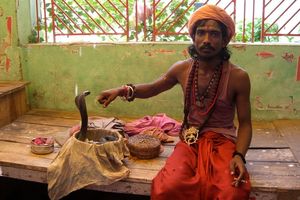 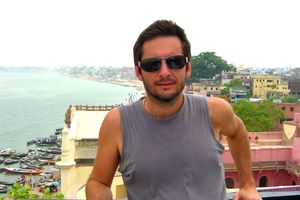 A place of many colors and many religions, also many cows and many rickshaws. Varanasi is situated on the Ganges river and is said to be India's holiest and one of the worlds oldest cities. The old town is a place full of holly men, cows, burning bodies, beggars, musicians and traders all willing to sell you something....you don't need. It was through talking to one of these traders that I managed to setup a meeting with a Flute player by the name of Disip Shankar. After explaining my Gavri music project to him, he was happy for me to record a short performance for a modest fee. 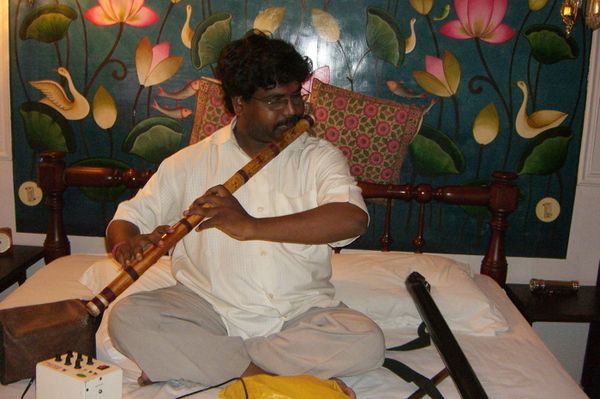 Our recording location ended up being too noisy, so after a false start we relocated to my hotel room. A quieter location except for the mooing cow which strangely was in the same key as the music being recorded. The piece of music was a morning raag for flute, played with the backing of an electric Tambura. Recorded to DAT (digital audio tape) via a stereo mic, it really captured the atmosphere of the moment, a beautiful piece of music, played from the heart.

After a brief chat and exchange of contact details we parted ways, both enriched by the experience. I hope to shine a light on Disip's performance at some stage in the future through a release on IC.Zed Records...........stay tuned !

Dinner and a Jam.

What a treat ! Invited to Indira’s place for dinner and and a evening of live music. I was asked to bring my recording gear to capture the event. Slowly the room was filling up with family and friends / musicians. After a drink and a chat, we all found our places to perform, and in my case to record the session. I could sense a kind of excitement in the room for the music we were about to hear. The instruments in play were, Flute, Sarod, Violin, Tabla, Harmonium & Vocals by Indira, and Spanish guitars by Paul George & Carey O’Sullivan of Australian band Tijuana Cartel. Also not forgetting the electronic Tambura, set to a particular key and creating the drone for all to play to…… 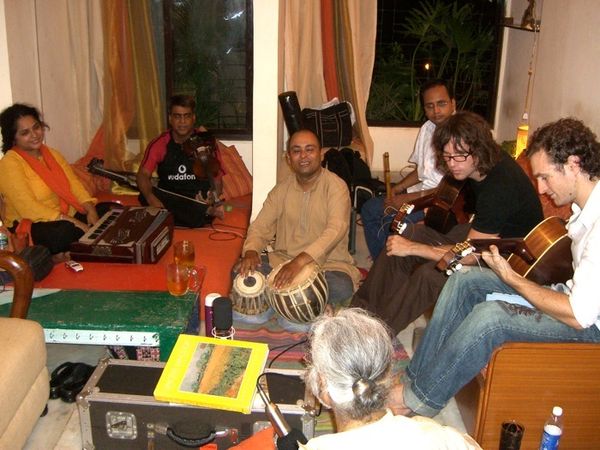 It was a very interesting and improvisational session for all of us, the recording process was much the same. With limited resources both Carey and I at times resorted to being human mic stands, moving mic's around from instrument to instrument for different solos and to feature the diverse performances. We weren't really setup to record the event properly, it was more the spirit of the evening we were trying to capture. 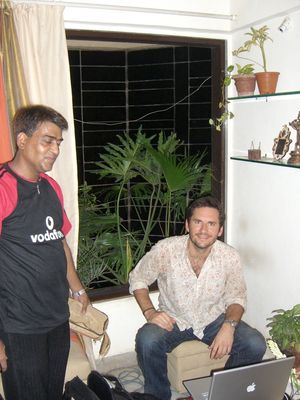 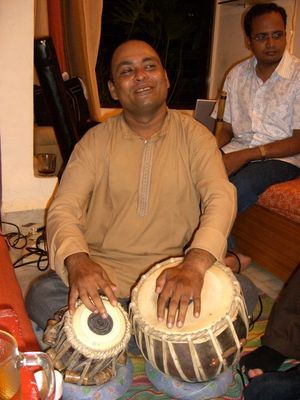 Everyone had there moment in the spotlight including Paul and Carey who performed an original song for everyone. It was a very spirited and heartfelt piece of music that was very much appreciated by everyone. After the music session you could really feel the joy in the air, a feeling of celebration. Then came a wonderful home cooked meal, my first for over a month........oh...yea!

It's not often you find yourself in a room with people who posses such talents. This experience was definitely one of the highlights of my trip to India, and judging by the response, a pleasure for everyone involved that night. 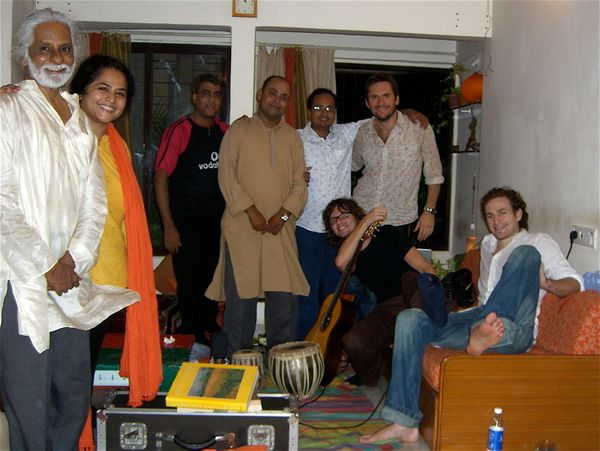 What a sweet and sexy voice this young starlet has. Heralding from an Indian pop girl group called VIVA, now disbanded, Anushka lends her voice to singing songs for Bollywood movies and doing live performances. Her mobile phone seems never to stop ringing and her work commitment involve a busy travel schedule, performing live around India and also working as a photographic model. 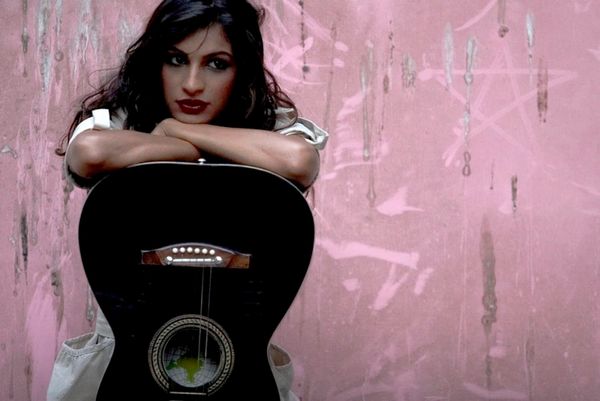 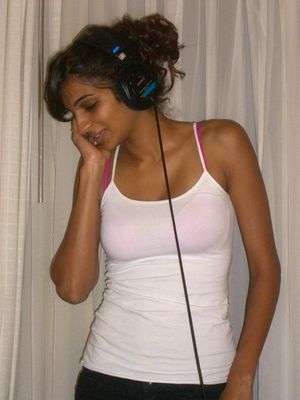 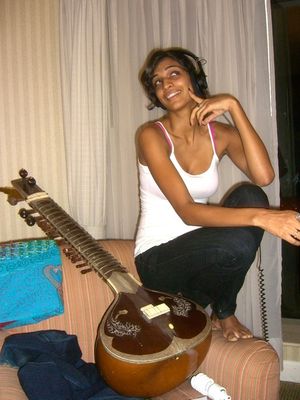 The only hurdle has been trying to get hold of this elusive and understandably busy talent. Unfortunately it seems that I may be left with a half complete song, needing one more recording session with Anushka to complete the track.........I got to say it's been a frustrating process trying to get hold of Anushka, let alone getting her to find the time for that final session. Our first recording session was constantly interrupted by her mobile phone, which she couldn't bear to switch off.

(Update: Unfortunately I wasn't able to pin down Anushka for that elusive final recording, looks like the track I had in mind will be getting reworked a little.) 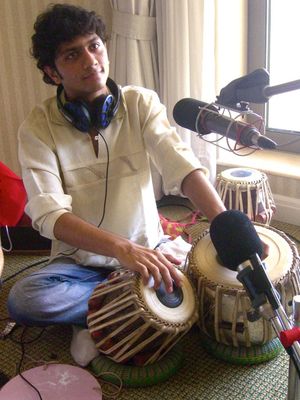 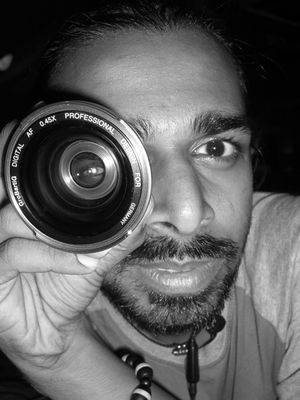 While at Santa Cruz railway station (Mumbai) I had a chance meeting with a local photographer, Nitin Patel, who I later realised as being a very helpful and talented young guy. I was in the middle of shooting some time-lapse 8mm film, collecting footage for an upcoming Gavri video clip. After explaining to him that I was in India looking for musicians to record with, he mentioned he had some contacts and may be able to help……… 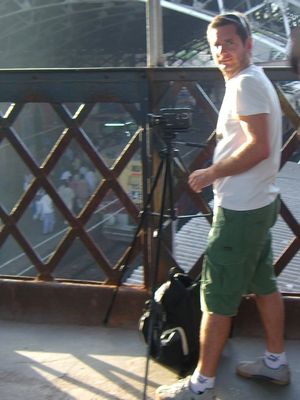 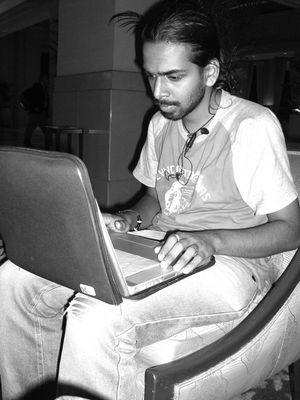 A few days later I was invited by Nitin to go to an Indian classical music recital. This was where I had the pleasure to first hear the inspiring talents of 19-year-old Ojas Adhjya, an extremely talented Tabla player. After the concert I was introduced to a young guy who kindly offered to provide me with Ojas’s phone number. 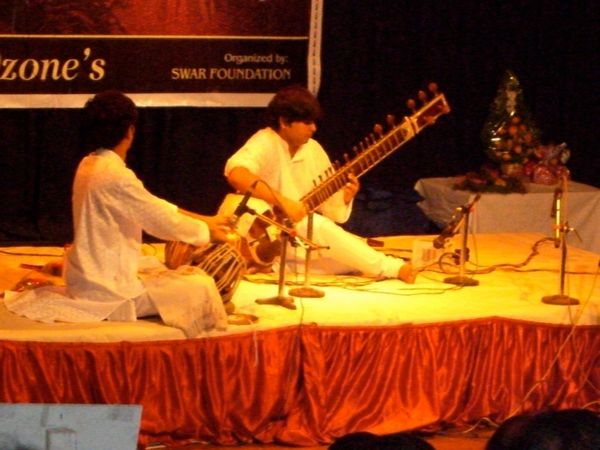 Again, just a few days later, Nitin calls me with the number and the rest is history. We organized to meet at my hotel and do the recording session in the hotel room. It was an interesting process as the recording session was a combined effort between two other musicians and friends, Paul George & Carey O’Sullivan from Tijuana Cartel. We all contributed tracks for Ojas to perform to, and given the limited time and resources the results were great. Just one way a chance encounter can lead to a privileged experience…………Thanks Ojas…………and Nitin. 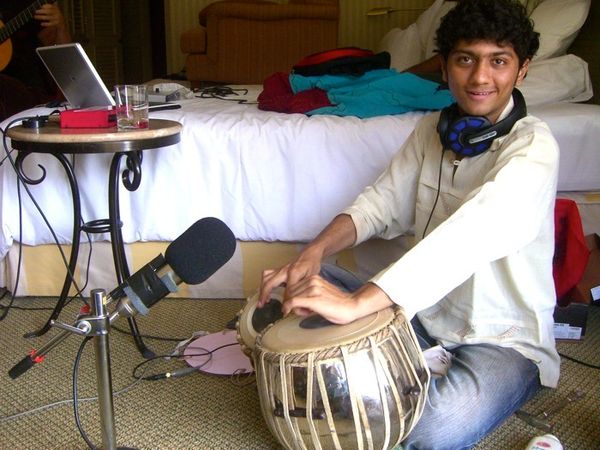 A singer who’s voice is an instrument of beauty and power, evoking images of modern grace and old-world mysticism. Classically trained in the Patiala Gayaki (Hindustani classical music), Indira’s voice is a tribute to age old traditions set against the backdrop of our times. 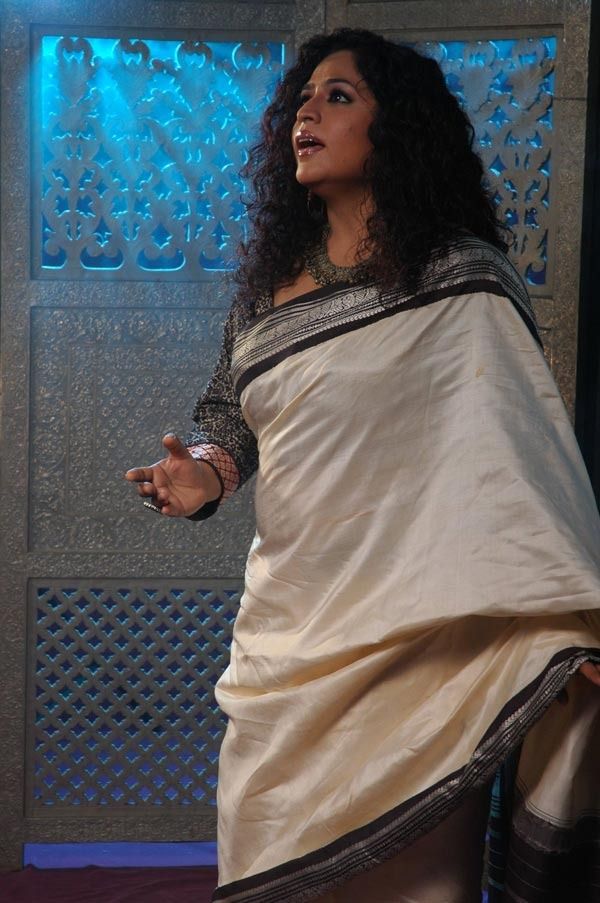 Having the pleasure and experience of working with this gifted artist was certainly one of the highlights of my trip to India. Her generous spirit became evident when we got a call inviting myself and my two music colleagues to her home for dinner, and requesting Paul to bring his guitar and for me to bring my recording gear. There will be a group of musician’s, all friends of Indira, coming to dinner and for the Jam session that is to follow. Some of the instruments include Flute, Sarod, Tabla, Harmonium, Violin Guitar and Vocals by Indira…………I’ll be updating this article after the event…………..stay tuned. 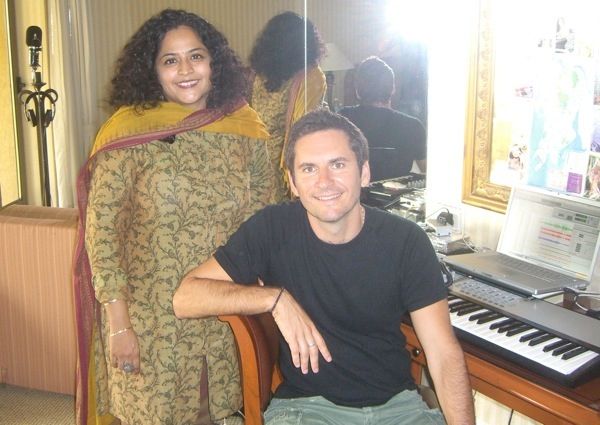 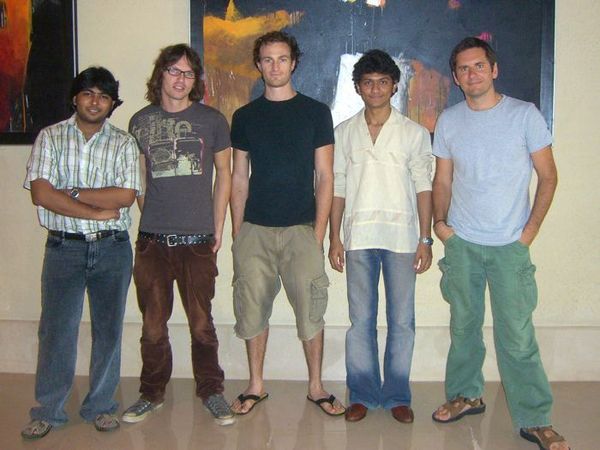 From left to right :

Chirag Katti : An incredible talent on the Sitar. He performs at Indian Classical music concerts all over India and was one of our session musicians.

Paul George : A very gifted and talented musician / guitarist. Paul's developed a style of playing all his own, using Gypsy scale with hints of Jazz and Classical. He's also the front man for Australian band Tijuana Cartel.

Carey O' Sullivan : The other key member of Tijuana Cartel. Carey looks after much of the production side of the band and is also a bit of a genius when it comes to music programming & manipulation. A jack-of-all-trades and master of many.

Ojas Adhiya : A truly awesome Tabla player and one of our session musicians while in Mumbai. I meet Ojas at an India Classical Music recital in Mumbai. He plays a lot of concerts with his friend Chirag who plays Sitar. Another musician told me that Ojas is in the top 20 Tabla players in Mumbai. That's saying a lot considering he's 19 years old and there's over 18 million people in Mumbai...... with a lot of Tabla players.

Robert Chomicz : That's me, the guy behind the music of Gavri. I was very fortunate to be invited to India by my two friends Paul and Carey, they were about to embark on a three month residency working at the Marriot Hotel...... playing under the guise of Audio Shaman. Our plan was to work on our music projects and to share in the process of working and recording with some of the local musicians in Mumbai. 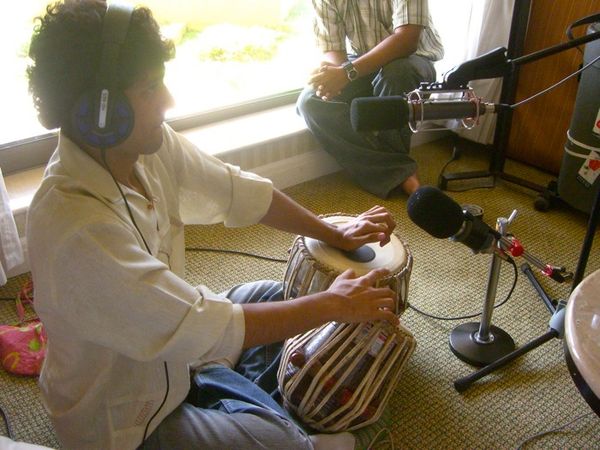 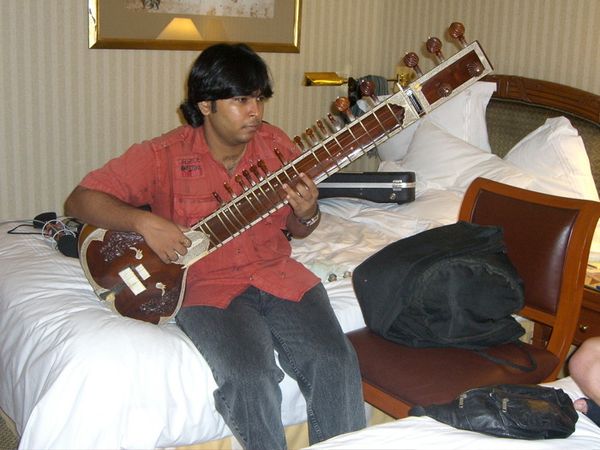 The recording of vocals for the song Gatchami. 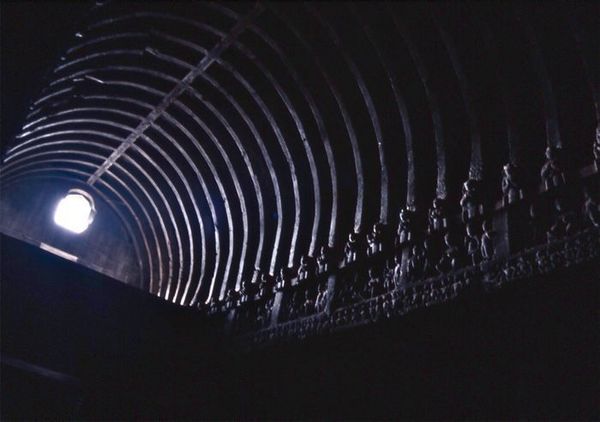 Seven long hours on a train west of Mumbai, I found myself in the enchantment of Ellora Caves. The caves are World Heritage listed and not far from Aurangabad in India. While I was exploring these ancient monuments and shrines, I was spotted by Imran, a 19 year old local man who was selling old Indian artefacts and postcards.

Once we got the business out of the way, getting the hard sell from Imran, purchasing an old coin and a few postcards I didn’t really want, we started to explore these amazing caves. We exchanged stories, walking and laughing as he told me of his happy life in Ellora. We rediscovered an ancient Hindu Temple with magical acoustics. (pictured above) We experimented with sounds as young kids do, to hear our own voices echoing in the cave. 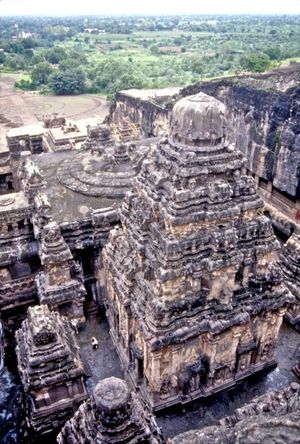 I quickly realised the beauty in the sounds we were hearing as Imran started to sing an old Sanskrit mantra. The natural acoustics in this cave were amazing. I asked if he wouldn’t mind if I recorded him singing this beautiful mantra, explaining I had a microphone and a recording device. Strangely looking unsurprised with my request he was happy to sing. From these few fortunate moments of ancient inspiration came the vocal for the track “Gatchami”.

After the recording was over he was eager to hear his voice back on the headphones, laughing at himself and being amazed at the clarity of the recording. I explained that I may one day like to use it on a record, asking if it was ok……. he said no problem but refused my request to take a photo and to note down his last name. I asked why….. he explained that if some of his Islamic friends found out he sang a Buddhist mantra he may get in trouble.

Ellora Caves: The cave temples, chapels and monasteries of Ellora were carved over a period of five centuries by (Buddhist, Hindu and Jain) monks and date back as far as 600AD. They stretch for over 2 km. 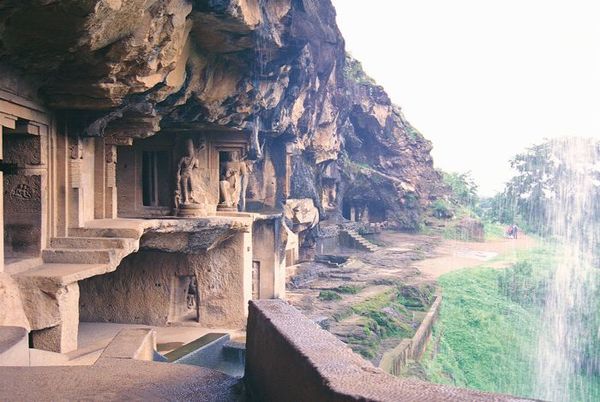